Here’s a little odd stuff we ran into.

It turns out that if you hit a garden spider with a certain pesticide it will wait a few minutes and then release a torrent of silk like an elastic band.  This one just happened to catch the evening light, which made it look pink. 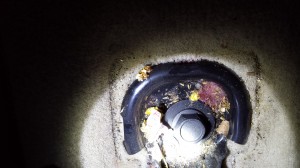 A LOT of black carpet beetles showed up in a recently purchased SUV.  There appeared to be no source.  The photo above is of the middle seat anchor bolt.  Close inspection shows black carpet beetle larvae crawling around in severely damaged unpoped popcorn.  The previous owner had little children, who got food into all the cracks and crevices of the car.  Such fun. 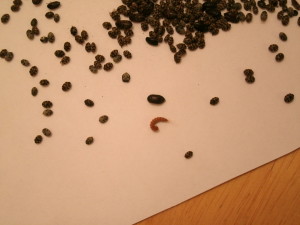 A piece of “antique” furniture had a little problem.  Dust and holes started showing up.  The “antique” was fake, but the pests were real.  Powder Post Beetles drill through wood and, over a long period of time, destroy it. 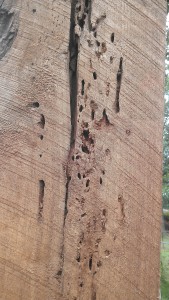 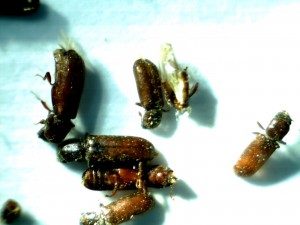 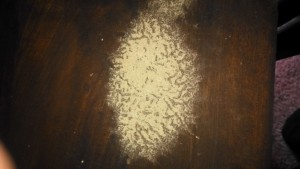 Note the tracks the adult beetles left through the frass (powder).

This grain beetle was just a little off from the image I found to ID it, so I sent it off to an expert.  The reply was “I think it is a Siamese Grain Beetle.”  I’m posting it just to show that I found some around here. 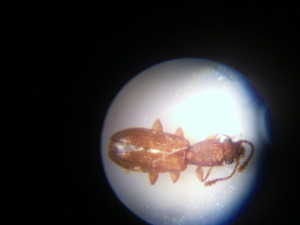 In the event you run into a dead animal, we recommend not getting too close, because of what pest may be on it and choose to be on you instead.  This dead possum was an exception, and in addition to a mass of fly maggots there were rarely seen carrion beetles.  Yes, they hid as soon as they saw me. 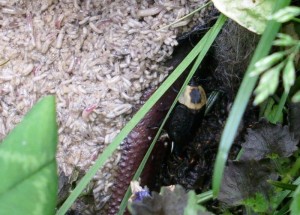 Alright, I know that this is not a bug.  A customer moved to a new house and had us treat it for invaders.  During the inspection I found this mass of mushrooms growing on the drain of the guest toilet.  Yes, there was a leak. 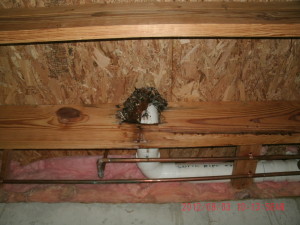