We’re getting a lot of emergency calls about “hornets” in the ground.  If they are huge, swarming around and seem to be attacking each other on occasion, they are probably cicada killers.  They may or may not be drilling holes in your yard and leaving large piles of dirt next to the holes.  They will not attack you, and are fun to watch as they sting cicadas and bring them back to those holes.  Here is one who posed for photos just after I killed it. 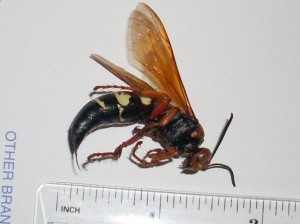 Bald-faced hornets are a lot of fun.  They look fierce, but are organized and predictable. That makes them easier to kill.  When the nest is little, they have fewer sentries and will buzz you but not attack unless severely provoked.  That happened with the first photo. 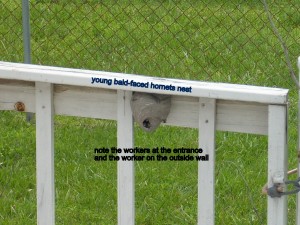 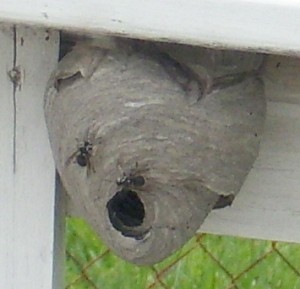 This mature nest had two entry holes, multiple sentries, four flight paths out and two flight paths in, and sent out 15 hornets to challenge the disturbance when I poked a hole in the top of the nest. 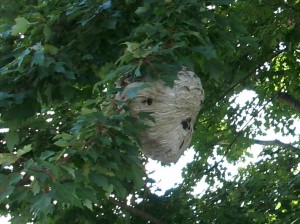 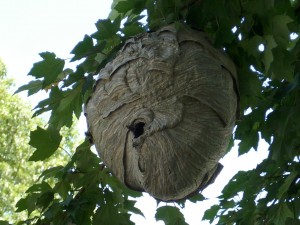 When you have a nest like this, we give a discount if you cut the nest down and hold it for us while we treat it.  Call us first, before you cut it! 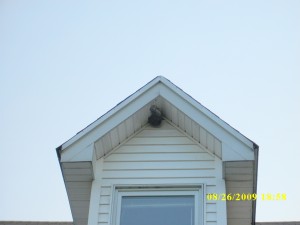 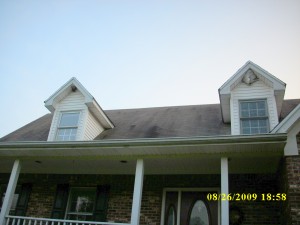 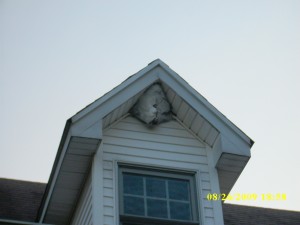 When you have two active hives on the same house and you have to go out a window to treat them, call a pro.  The odds of getting stung are really high.

Sounds big.  They are.  Similar length as cicada killers, with a thicker body.  They can and will hurt you.  The nest below was stinging the engine of a train in Wady.  The video is from after it was treated.  Such fun!

In this video, notice first the dirt patch, lower right. Then watch the traffic in the opening, incoming high, and rolling out low.

I also teach break dancing. Here are some of my better students. Yes, these are the ones who were rolling out of the opening above.